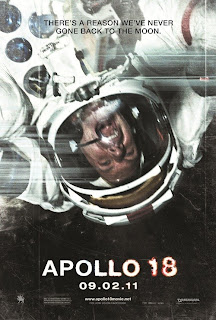 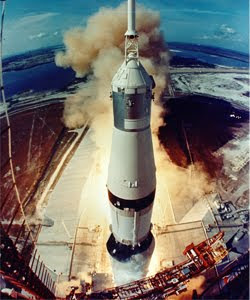 explain, so let me set the scene. Old footage from NASA's abandoned Apollo 18 mission is found where two American astronauts were sent on a secret expedition reveals the reason the U.S. has never returned to the moon. There are under budgeted movie producers living there ready to suck our money and brain matter to substitute a real plot with believability and great camera work. But seriously, folks, this film does very little for justifying support for the Arts. With a shoe string cast of three; Warren Christie, Lloyd Owen and Ryan Robbins , it uses a documentary format to attempt credibility. The character development was predictable and a cliche, focusing mainly on the one Astronauts and his family. Ground Control to Major Blah! He has a cassette player in space playing a song written by the band Yes more than three years later than when the mission supposedly occurred. The other characters are even more two dimensional, your typical play by the rule guy and your run of the mill rebel without a pause.

Was there ever really an Apollo 18? When the Apollo program began, there were plans for an Apollo 18, Apollo 19, and Apollo 20 mission to land on the moon. These were canceled in 1970, and the hardware built for those missions was scrapped, re-purposed or donated to museums. I know this for a fact as my father worked on Apollo 17 and was hired by Lockheed shortly after the closing of the space program. I was able to tour the NASA facility at Moffett Field where I saw an assembly of rocket boosters and landing gear, presumably for unmanned missions. The period of History, however, was of great interest. Did Russia really have a lunar lander? Yes, it was called the Lunniy Korabl (LK, for short), developed in the late 1960s and tested on three occasions from 1970 to 1971. Due to the failure of several N1 rocket launches, the LK was never used for a proper lunar mission. Interestingly enough, the LK was initially designed to be piloted solo, but it could accommodate a crew of two cosmonauts. Fact: When moving around on the moon, the astronauts do not appear to be affected by the lighter gravity. They walk normally, even shuffling their feet at times. Fact: While on the "dark side of the moon" it is stated that side never sees sunlight when in fact it does. The far side of the moon is covered by the sun about once a month. 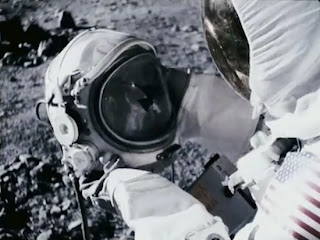 Director Gonzalo López-Gallego takes a multitude of shaky, poor lit and often too conveniently located camera shots “journalizing” the space expedition. The film begins with a typed preface stating the films were taken in Super 8, however, the video camera was invented by then, and I noticed that many of the shots were a combination of old video, super 8 and 35 mm. I recall monolithic VCR s existing in the Office of Education in 1970 where my mother worked as an educator.

Writers Brian Miller (screenplay), and Cory Goodman take this Ron Howard like plot, mixed it in with just about every Suspense Thriller you have ever seen, and capped it off with a distinctive vague ending that has become so popular lately. I don’t want to be a spoiler, but the mere possibility of the tapes/films would survive in space, let alone be returned into re-entry without crisping to a chard. There is also some plot errors (which I won’t divulge) left me scratching my dome at the end. 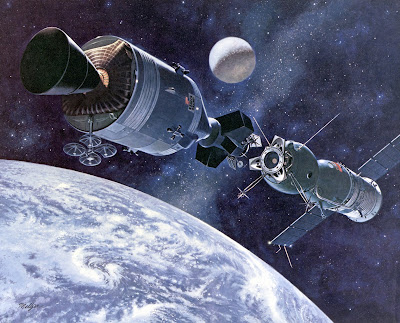 I give it a C minus. Please God, don’t let them make a sequel.

Posted by rumpledcritic at 2:55 AM