Too many Cowboys, Not Enough Aliens


Too Many Cowboys, Not Enough Aliens! 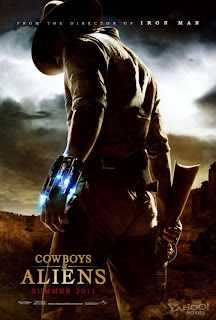 A stranger with amnesia and a strange shackle on his wrist (Daniel Craig aka James Bond) stumbles into the hard desert town of Absolution In 1873 in the Arizona territory. Before he can get there, he has to contend with all the venomous creatures on bellies and on horseback. The Claiborne clan try to get the drop on him, eldest Wes (played by veteran actor Buck Taylor of Gunsmoke) and sons who give him a great old fashioned shoot out, disastrous, of course for the boys and Dad. The stranger wanders into a young bully terrorizing the locals, to whom he teaches manners. Unfortunately, this youth is the local rich kid, lone heir to the Dolarhyde ranch, the local cattle land owners who also own the town. The cocky youth shoots a deputy and is locked up, much to Big Daddy Dolarhyde’s dismay.

Eventually, someone (cause Absolution is such a Mecca!) recognizes him as Jake Lonergan ,a rustler strong-arm , which lands 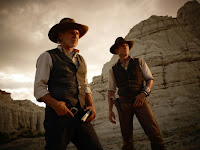 him in Meacham’s(Clancy Brown of Highlander, Shawshank Redemption) jail cell where he tries to remove the strange shackle, where he is stuck in a cell next to the young Turk. . By all normal appearances this would be your typical Gold Boom Town, but this stranger soon finds out they have a secret that has eluded even the town Cattle Baron , Woodrow Dolarhyde (Harrison Ford) . Then, all hell breaks loose. 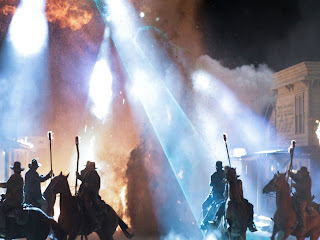 The town’s people hear a roar and look skyward to see lights like from “First Encounters of the Third Kind” appear deploying smaller jet like crafts. To the horror of the town’s people, the stealth bullet shaped crafts swoop the town, roping humans like cattle, dragging them up to the mouth of the Mother Ship. The stranger’s shackle begins glowing and he makes his escape from the jail house while all this pandemonium ensues.

Faced with numerous loved ones ( including the Sherriff) snatched into the air by these alien rustlers, Lonergan and Dolarhyde must join forces with the assistance of the local Doctor, an Indian Stepson of Dolarhyde, and a Gunslinging mysterious girl next door, 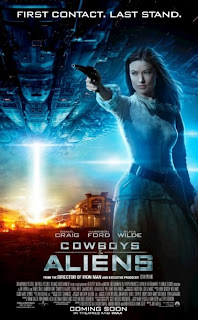 Like all Westerns, there is a formula which involves an anti-hero, a formidable foe alliance, a weak character, a love interest, and a mutual enemy to defeat. In this case, the enemy was virtually unseen. Visuals of the creature were as fleeting as the monsters from “ALIEN” with a “Predator” look, shown only in flashback scenes and shabbily drawn running CGI images. If the director’s (Jon Favreau of Iron Man )intention was to create more of a suspense with the lack of the creature on screen, it was poorly overdone. The alien’s absence only made the under budgeted visuals more evident. The character development seemed to dominate the story, even though the protagonist seems to be a bit unsympathetic to us, we still find ourselves routing for us stupid humans. It did have elements of Indiana Jones, especially the constant hat retrieval of Lonergan and the gratuitous explosions and gunfire. 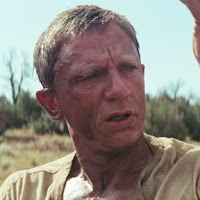 Cast for his resemblance to Steve McQueen “The Magnificent Seven”, Craig has the cool calm which gives him a nice contrast to Harrison Ford’s gruff John Wayne impression. With the assistance of Speilber
g, we see Ford and a former James Bond on screen together again (Ford as Indianna Jones and Connery as his Dad) creating a complex combination that works well. 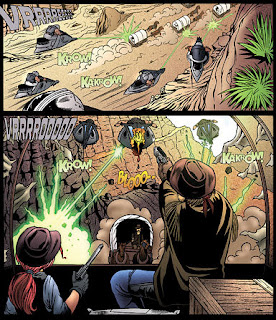 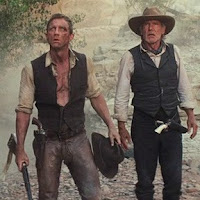 Produced by sixteen names, including Steven Speilberg, Ron Howard and the writer Robert Orci, this strange blend of Western Drama and Science Fiction( from a comic book) seems to be a new genre that hasn’t had its day yet. I was impressed by the acting, the lighting, and the camera work. The wholesomeness would appeal to a family, but I wouldn’t recommend it for children under 13 years of age. The on ship scenes of experiments and the drooling alien fangs gave me a bad dream or two. The concept is great and the cast was incredible, however, too many cowboys and not enough aliens make for a poor box office seller.

Posted by rumpledcritic at 10:40 PM